The centrality of nature in indigenous art

The centrality of nature in indigenous art 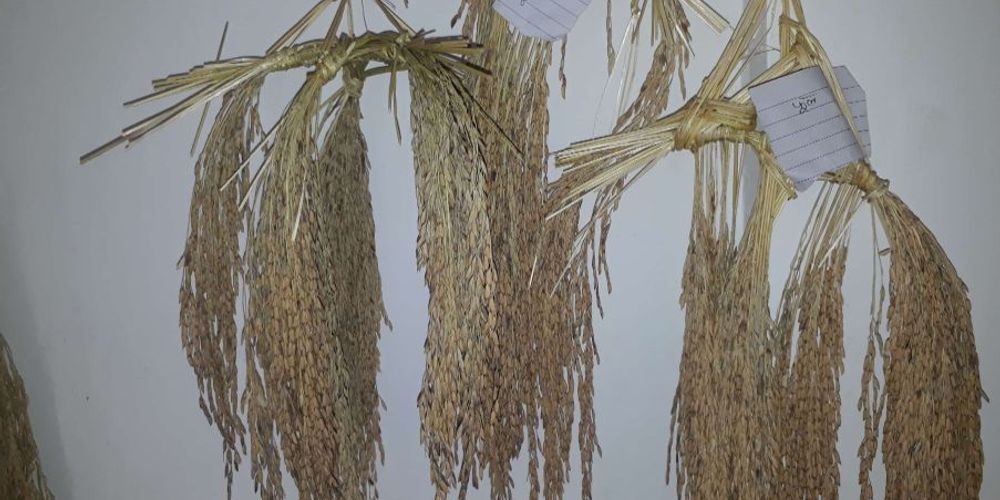 In 2014, I was contacted by a scholar who wanted me to take a closer look at a photo of a minutely carved door from Chitwan. Although I was able to easily recognize the 30 or so figures on the small door panels – elephants, camels, oxen, cobras, donkeys, cranes, leopards, monkeys, deer, and horses, along with humans – the writing, although legible, didn’t make much sense.

This beautiful decorative door dating back to the 19th century was eventually revealed to belong to a Tharu household of elephant handlers. All the animals, except for the camels and the only bird depicted on the door, were from Chitwan, and the writing was eventually translated by the scholar himself to be the names and professions of the elephant handlers who lived in that home. The unique icons, motifs, colours, and style spoke of the people’s local, living reality. More importantly, they depicted an age-old human relationship with nature – the trees, animals, and birds – and its conservation. It’s a relationship that still persists, despite modernity’s intrusion into indigenous lives, and one which indigenous artists still attempt to recall through their work.

In the plains of northern India and southern Nepal, women have, for generations, taken out time from their daily chores to paint their home walls with artwork featuring decorative motifs, birds, animals, and trees from their surroundings.

The Kochila Tharu women, for example, decorate their house walls, granaries, and verandahs with recurring motifs of geometric and floral patterns, along with birds and animals – peacocks and elephants, in particular. Peacocks feature prominently because they are regarded as symbols of luck.

“The work is one moment in the continuum of time,” write Kurt W Meyer and Pamela Deuel, who spent four years exploring Tharu art in nearly 300 villages across Nepal, in an article for Asian Art. “The anonymous artist borrows from the elders, makes some changes, is free to improve on it – within the constraints set up by the culture, and this culture belongs to all.”

The centrality of nature

Many indigenous people in Nepal depict nature in their art. For example, during Krishnashtami, the Tharus of western Nepal adorn their adobe house walls with Ashtimki paintings. Basing their work on the Tharu folk epic Gurbabak Jalmauti, the artists start drawing from the bottom of the wall and move towards the top in the order that the elements and creatures were created by Gurbaba, the creator of Earth, according to Tharu folklore – water, fish, crab, tortoise, crocodile, and other water creatures, along with a boat carrying Gurbaba, his disciples, and his books. Tharus believe that during a past apocalypse, Gurbaba (accompanied by his disciples and books) sailed to a safe haven and created the new world. 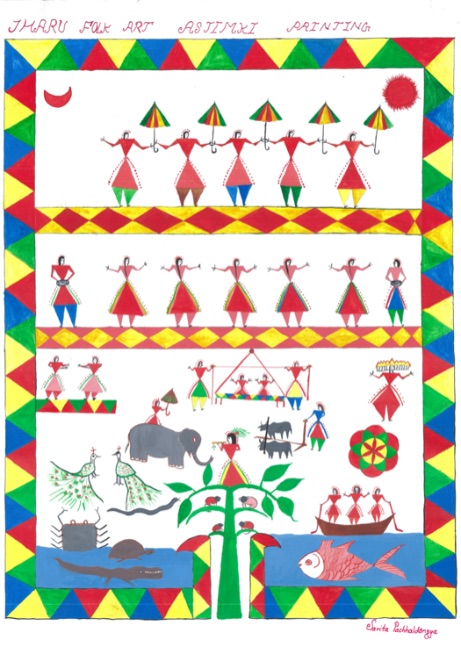 Centre stage in an Ashtimki painting is occupied by the kadam tree, with Kanha, or Krishna, on top of its canopy, along with the sun, moon, monkeys, and images of Ravana, Draupadi, and the Pandavas from the Hindu epics Ramayana and Mahabharata. The artists also include creatures like elephants, horses, camels, and peacocks.

By adding auspicious figures and observing austere rituals while creating Ashtimki paintings, the artists imbue their work with religious significance. But Ashtimki has also evolved beyond religion to include quotidian details that are part of modern Tharu life. Thus, one could say the art is evolving – sometimes in abrupt shifts – out of its more edenic past. “While much of this art is rooted in devotional activities, today’s artist seldom knows the significance of the designs, but still clings to the graphics of the elders, occasionally introducing contemporary designs such as a bus or airplane,” add Meyer and Deuel.

Much of the subcontinent’s indigenous art still draws inspiration from how things were in the past, when man and nature coexisted far more intimately. They are informed by an ethos that, for instance, coloured the 10,000 year-old cave paintings in Central India’s Bhimbetka, which depict birds, animals, and human beings living in harmony.  Man’s relationship with nature was of prime importance in the ancient cave paintings of South Asia, and it continues to be a central theme in indigenous wood carvings, house wall murals, and even rice-sheave artistry.

Even today, the Saura people of Odisha, India, paint stick-figure icons and triangular motifs comprising people, animals, birds, sun, moon, and the tree of life. Their paintings, drawn on house walls during harvests, childbirths, marriages, and other special occasions, tell the stories of the Saura community’s practices, myths, and beliefs. And as with Tharu art, Saura artworks of today also feature contemporary objects like buses, guns, planes, and bicycles, among others.

For ages, indigenous art has also depicted the relationship between humans and the animals they have domesticated. In Sohrai art, the artists show their gratitude to cattle by celebrating the pivotal role they play in ensuring good harvests. The homage to that relationship, which was once depicted on cave walls, has now migrated to the mud house walls of many indigenous peoples in Jharkhand.

The tradition is being kept alive by artists like Putli Devi, a Sohrai artist from Chotanagpur, Hazaribagh, India. She grew up watching her mother paint murals with her fingers and learned the art form. “I used to see wolves and wild cats make off with hens into the forest, so I started depicting them in my paintings,” she says in an interview with VideoVolunteers. “I paint from memory, things I have seen growing up and things that I see around me.”

Sometimes, indigenous arts’ relationship with nature can be difficult to decipher. In Nepal’s southern plains, the tradition of making plaited rice sheaves probably derives from a tradition of giving thanks to birds, especially after harvests. People originally hung the plaited rice sheaves, called jhutti, to provide food for birds and to also conserve the seeds of each species of rice harvested. The rice sheaf art pieces are shaped to represent various animals and household elements, such as the kauwa tholi  (a crow’s beak), machhariya (fish), patiya (mat), kakahi (comb), jhunjhuna (a baby’s toy), bena (a fan), bakhari, (a granary), and maur (a groom’s headdress).

Today, indigenous art is also used to convey a more urgent message about conservation. Mithila art, or Madhubani painting, made by the women from Bihar, India, and Nepal’s eastern Terai, is known for its brightly painted geometric and floral patterns, flowers, birds, animals, plants, and deities. The widely popular art form has not only made its passage from the house walls to handmade paper and cloth, but also been deployed in conservation campaigns. In 2012, artists in Bihar painted Madhubani paintings depicting Hindu deities on tree trunks to save the trees from being cut down.

One way to regard indigenous art is to view it as a lesson in living. Its lineage extends far back into history, and through the ages, it has documented mankind’s symbiosis with nature and taught us to revere that relationship. The indigenous artist’s notion of what nature comprises includes, beyond nature in its untouched state, the ecosystems that humans, animals, and plants jointly occupy, as well as the indigenous people’s attitude towards nature’s providence. As is the case with all other art forms, indigenous art has continued to evolve in response to the changes that have occurred in its subjects’– that is, the indigenous people’s – lives. It’s thus not surprising that today’s indigenous art also includes particulars from the modern world. But it is also an art form that continues to place unwavering faith in the value of learning from nature, and respecting and conserving it. And that is a lesson in wisdom modern man truly needs.