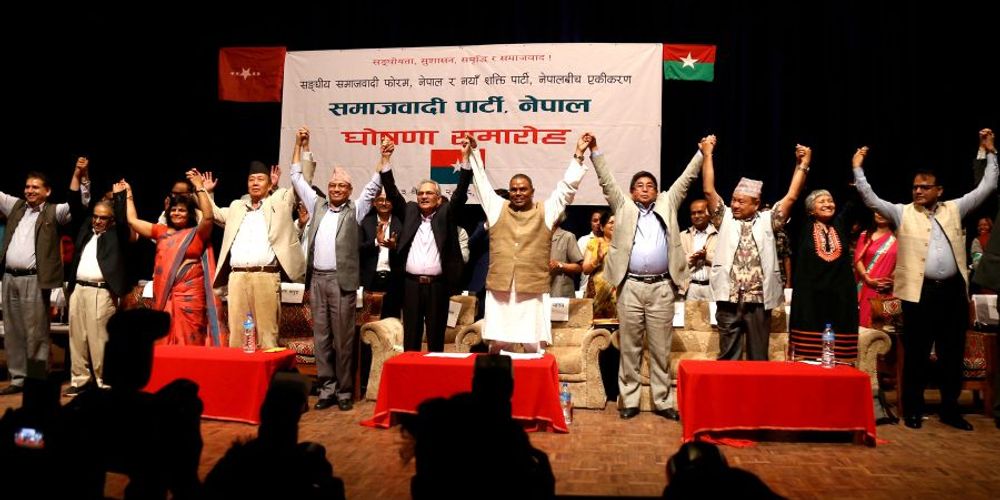 On September 20, 2015, Nepal promulgated a new constitution amid massive protests from a section of excluded and marginalized groups including women, Madhesis, Janajatis and Dalits.

It was seen as a big blow to identity based parties and ethnic organizations championing  for inclusive and proportional representation in politics and all state organs.

For many political pundits, the movement’s collapse marked a moment where identity politics had reached a point of no return.

Four years after the promulgation of the constitution, identity politics in Nepal is alive and kicking.

Its latest proof: the formation of the Samajbadi Party Nepal (SPN) with the merger of Upendra Yadav’s Federal Socialist Forum Nepal and Naya Shakti Party Nepal, led by former Prime Minister Baburam Bhattarai. SPN is now the third largest party in the federal parliament and leads a coalition government in Province 2.

At the merger announcement on May 6, Yadav and Bhattarai said that the party would fight for a prosperous and inclusive Nepal and what it calls “improved federal socialism.”

The party demands that Nepal’s federal divisions be redrawn, to form 11 states based on identity, in line with the recommendation of the expert committee on federal restructuring in the first Constituent Assembly (2008-2012).

“It’s not just a merger between (two) parties. It is a new type of national unification. The formation of Samajbadi Party Nepal, in a true sense unifies every ethnic group, community and region in Nepal’s  federal set-up and lays the foundation for new Nepal,’’ Bhattarai said in his address to the thousands of leaders and cadres who attended the merger ceremony.

Yadav said that the merger marked the beginning of “a new vision, a new idea and a new dimension” for Nepal. “We will establish a system that will create a prosperous, socialist Nepal, a Nepal that is free of discrimination, poverty and unemployment. This party will end discrimination based on class, color, caste and gender,’’ Yadav said.

The party demands that Nepal’s federal divisions be redrawn, to form 11 states based on identity, in line with the recommendation of the expert committee on federal restructuring in the first Constituent Assembly (2008-2012).

The Samajbadi Party’s other agendas include a presidential system of government and a fully proportional electoral system. The party says that it is committed to protecting historical achievements like republicanism, federalism and secularism.

While the party still cannot take on the much larger ruling Nepal Communist Party or even the shambolic Nepali Congress, the second largest party in the federal parliament, the merger is nevertheless significant. Bhattarai’s entry gives the Samajbadi Party a much-needed widely accepted public face. With him, Yadav and Ashok Rai at the helm, the party leadership reflects Nepal’s ethnic diversity better than most others. Bhattarai’ entry could assuage concerns that the party militates against Bahuns and Chhetris. In the 2015 election, in light of its failure to win a single seat in hill constituencies in the 2016 election, Yadav’s Federal Socialist Forum was clearly seen as a Madhesi party, rather than a socialist party, despite having joined forces with the Federal Socialist Party, led by Ashok Rai.

The numerous identity-based movements in Nepal seek to counter Nepal’s history of being a  mono-ethnic state in a multiethnic country. Between the start of the peace process in 2006, and through to the  2015 earthquake when the second Constituent Assembly was in place, the movements had the support of the Unified Communist Party of Nepal-Maoist (UCPN-M). All that changed after the earthquake, when UCPN-M chair Pushpa Kamal Dahal signed the 16-point agreement that formed the blueprint of the new constitution.

The agreement rolled back significant commitments made in over 40 agreements between successive governments and identity based groups. Without the support of a large, powerful party, the identity-based social justice agenda appeared to be losing momentum, despite the efforts of Yadav, in particular. The new party could give impetus to the efforts of identity groups that seek constitutional amendments to strengthen measures related to inclusion and federalism. In the long run, this could also crystallize renewed public support for this agenda and mobilize a challenge to the dominance of the NCP at the centre and in six of Nepal’s seven provinces. SPN’s leaders are in talks with other small like-minded parties, including the  Rastriya Janata Party Nepal, its coalition partner in Province 2.

These efforts are in stark contrast with the Nepali Congress and NCP, who neither present a clear agenda nor deliver on promises of prosperity. Trust in the ongoing exercise of federalization is already shaky, and few expect it to deliver on people’s aspirations for opportunities, equality and inclusion. SPN’s demands for proportional representation and a presidential system of government could gain currency and enable the coalescing of a support base.

It is not all smooth sailing, though. If SPN is to turn itself into a truly national force, the party needs to significantly improve its organization and mobilize more support in hills. The party must counter the ruling NCP’s brand of populism, which centers on nationalism, patronage and maintaining the status quo.

Even in the Madhes, it must overcome  a variety of oppositional forces in the form of numerous other parties and outfits and, now, CK Raut. Once a hunted separatist, Raut has now joined mainstream politics and often targets Yadav, accusing him of trading the agenda of Madhesi people for power.

SPN senior leader Ashok Rai said that the party was aware of the challenges ahead and is carefully weighing various options available to them hereafter. He said that the constitution amendment would be their next target.

"We are waiting for the constitution amendment as per the understanding reached between the two sides before our participation in the government. If that doesn't happen, the party would take necessary steps including withdrawal from the government,'' said Rai.