Reeling from one crisis to the next

Reeling from one crisis to the next 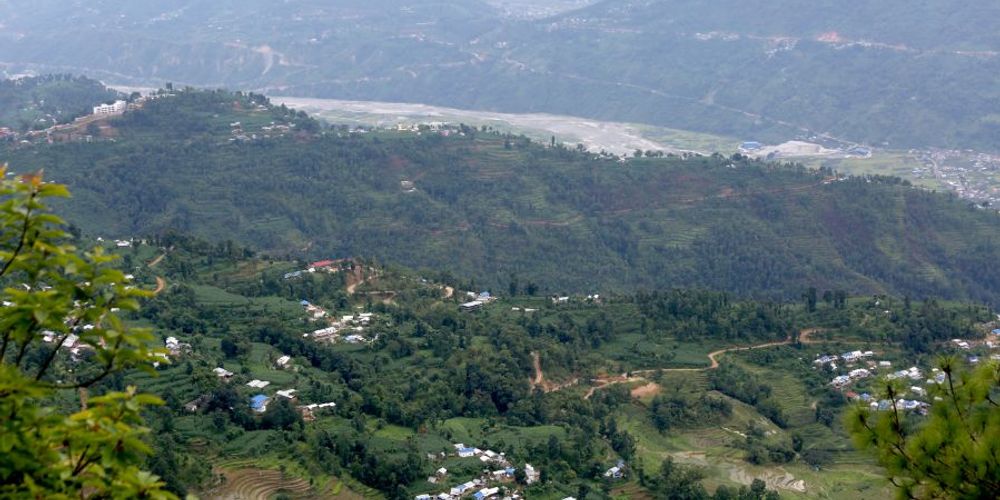 Narayan Tamang was just starting to see some glimmer of hope five years after 2015’s devastating earthquakes. But he now finds himself in a deeper hole, owing to the Covid-19 pandemic, which has robbed him of all his means of making a living.

For Narayan, 23, the past five years have made for extremely difficult times. He had to soldier on through losing his family members in the earthquake and losing his house--which he’s only just finished rebuilding. But now that the latest crisis has heaped on him a whole new set of problems, the glimmer of hope that he was clinging to has been all but extinguished.

The devastating earthquake had reduced his two-story mud-stone building to dust. His elderly mother’s body was found under the rubble in the courtyard. Three other family members--his brother, sister-in-law, and nephew, who were attending a relative’s wedding in a neighbouring village--too suffered a similar fate. Along with Narayan’s family members, 23 others attending the wedding were killed when the house they were in crumbled.

Of the total of 8,702 killed and over 220,00 injured by the quakes nationwide, 3,440  of those deaths occurred in Sindhupalchok, and 2,101 were injured in the district. Across Nepal, apart from the loss in human lives, property worth tens of billion of rupees was destroyed by the earthquakes.

Narayan survived the earthquake by sheer luck. A menial labourer, he was involved in a road-construction project in the neighbouring village of Sirubari when the quake struck. He struggled much in the wake of the devastation, and he was just piecing together his life again. After receiving a Rs 300,000 grant for rebuilding his house from the National Reconstruction Authority, Narayan had borrowed an additional Rs 200,000 from a relative and a local cooperative group. The completion of his house had rekindled his hopes for a better life. Although he hadn’t been able to settle the loans he’d incurred for rebuilding his house, he had finally been able to move back home from his makeshift shelter.

Later, hoping to ease the family’s financial burden, Narayan had wanted to help get his elder brother, Janak, to the Gulf.  Janak borrowed some of the money needed to meet travel and other procedural expenses for his overseas employment. Others in the family chipped in. An aunt sold one tola of her gold, a sister sold yet another tola of gold, and Narayan  himself borrowed an additional Rs 100,000 from a local cooperative.

But less than a year after Janak landed in Saudi Arabia, he is now without a job because the Covid-19 crisis has affected the entire labour market in the Gulf. He is desperate to return home, regardless of the accumulating interests on his loans.

“Due to his job situation in Saudi Arabia and the fear of the coronavirus, he wants to return home at the earliest,” says Narayan. “He will be back once international flights resume. But that will mark just the beginning of a new crisis.”

Narayan knows the family’s financial problems will be difficult to resolve. They have many loans to pay off.  Unlike in earlier times, construction work is difficult to come by for Narayan now.  Most construction projects in Nepal ground to a halt after the government enforced the nationwide lockdown in the last week of March. His chances of finding some other  type of work in the nearby areas are also getting slimmer--because villagers in Sindhupalchok have been restricting inter-village movement of locals, to stem the spread of coronavirus.

Narayan Tamang and his newly built house/ Photo: Purnima Shrestha[/caption] “For poor people here, there is no escape. And as if all these problems weren’t enough, worms have destroyed the maize we were growing,” says Narayan. Further, with swarms of locusts entering Nepal from India, the villagers in his district might be staring at a food crisis too.

The job crisis has been so perennially pervasive in the mountainous villages of Sindhupalchok that at least one, if not two, members from each household has gone to the Gulf to work as labourers. According to Bansha Lal Tamang, chairperson of Indrawati Rural Municipality, which includes Narayan’s village of Chhapdanda, 1,835 youths from the municipality have gone to 44 countries seeking job opportunities.  “Half of them want to return home immediately because of the coronavirus crisis,” says Bansha Lal.

A large number of people from Sindhupalchok also go to Kathmandu for work and business because the district is not too far from the nation’s capital. A few people work in India as seasonal migrant workers. And those who can scrounge up the money to do so find work in the Gulf and developed countries. In Indrawati Rural Municipality, of its total  population of 28,000, 30 percent work in Kathmandu as manual labourers, and an additional 20 percent temporarily reside in the capital, according to details compiled by local authorities. All of them have returned home during the Covid-19 crisis. Before the crisis struck, many of them worked as daily-wage labourers, street vendors, taxi drivers, and so on. Those who  were employed in the informal sector--in hotels, restaurants, security companies, malls--are afraid their jobs won’t be waiting for them.

“People like me don’t have any steady source of income,” says Shanti Shrestha, 55, who worked as a street vendor in the capital. She returned to her village after the lockdown started. She has had to fend for herself after her husband died five years ago, and with her only daughter already married off. Things weren’t easy even before the pandemic. “Contractors don’t give us work, because they question our work abilities. When we don’t have a job, even local shopkeepers don’t sell us foodstuff on credit. For now, the ward office in the municipality has arranged a job for a few days,” says Shrestha, who is paving stones for the Lamatol-Budichour Road section in Indrawati. The 600 metre road-soling work, a partnership project between Indrawati Rural Municipality and the UNDP Nepal, was created to help ease employment problems for the marginalized, vulnerable, and jobless in the rural municipality.

The overall situation is as dismal in neighbouring Melamchi Municipality. Dambar Bahadur Aryal, mayor of Melamchi Municipality, says the job crisis will worsen if Covid-19 cases spike in Kathmandu,  because a large number of people from his municipality work in the capital’s informal sector.

“As many as 15,000 people have returned home from Kathmandu since the lockdown started,” says Aryal. “And even if they go back, some of them might return home again if corona cases spike in the capital, ” says Aryal.

As per details compiled by Melamchi Municipality, 1,960 people from the municipality are now working in Gulf nations and around 250 are working in India. Most of them want to return home because of the Covid-19 crisis. For those working in Kathmandu--who have mostly returned home--their livelihood depends how quickly the capital  returns to normalcy.

To provide jobs for marginalized and vulnerable people, the local governments in the district of Sindhupalchok have rolled out cash for work programmes that use funds allotted for the PM’s Employment Fund and from development partners. The local governments have also told the villagers to focus on agroforestry and farming, by utilizing barren and unused land, so that they can derive benefits in the long run.

“Under the cash for work programmes, we have managed to provide jobs for some of them for a few weeks. But it will be difficult to create jobs for everyone if all those working in Kathmandu and abroad return home,” says Mayor Aryal. “The only positive thing that has happened is that the Kathmandu returnees have cultivated land that had been left fallow for years.”

“If it goes on like this,  we will die of hunger,  rather than of the coronavirus,” says Bikash Tamang, who is back home from Kathmandu.  Bikash--a school dropout who was working as a helper at Kathmandu-based Rock House Café--had returned home in an ambulance that was ferrying a relative of his. The café had promised to pay him Rs 7,000 per month, but with the lockdown, the owner reduced his salary to 5,000. “It’s difficult to find a job now,” says Bikash, who recently had to funnel money into rebuilding his quake-damaged house. The 20-year-old’s earning’s take care of his wife and aging grandparents. His father died some two years ago, and his mother later eloped with another man.

Bikash Tamang/ Photo credit: Purnima Shrestha[/caption] “The Rural Municipality has arranged a maximum of 10 days of work for road soling,” says Bikash. “That will help us survive for a few weeks. But we don’t know what we’ll do in the days to come.”

The pandemic has already destroyed the livelihoods of countless working-class Nepalis in the country.  Now, the jobs of 400,000 Nepalis working in the Gulf nations are up in the air. They are eager to return home, and their return will hugely impact a remittances-dependent country like Nepal.

A World Bank report published in April has projected that Nepal will lose 14 percent of its total remittadays to come.”nces (or at least Rs 145 billion) in 2020.  Nepali migrant workers sent home $8.64 billion in 2019, and the remittance flow was supposed to increase further in 2020.

The prognosis for the national job market is also bleak. A report commissioned by the United Nations and conducted by the Institute for Integrated Development Studies shows that owing to the Covid-19 pandemic, three in five employees working in small and medium enterprises have lost their jobs.

In Sindhupalchok, except for schools and colleges, all government offices and local markets have reopened, with caution. But business is not encouraging at all. Among the most badly affected have been the hotels. Hoteliers interviewed by The Record said locals--fearing Covid-19 spread-- inform security personnel if any strangers or clients arrive at hotels, seeking food or accommodation.

Pemba Chhyap Sherpa, 60, the owner of Yak Guest House, Kutumsang, says he hasn’t opened his establishment since the lockdown started. “Some two months ago, two Australians came to us, seeking food and accommodation. We offered them food outside of the hotel and asked them to put up in a tent. A few minutes after they left, army personnel from Langtang National Park came to our hotel to inquire about the Australians.”

Sherpa thinks some villagers had informed the Army about the arrival of the tourists.  The trekking routes in Sindhupalchok have been free of tourists for months now.

“If I reopen the hotel, the coronavirus might kill us,” says Sherpa. “If I don’t,  I’ll have a  financial crisis on my hands.”