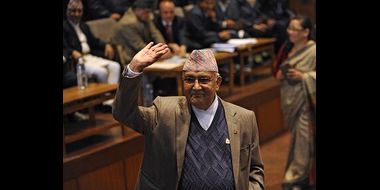 When Prime Minister KP Sharma Oli abruptly prorogued the parliamentary session on Wednesday, speculations were rife that he was up to something unpredictable. Something ominous. Oli had bypassed the parliament’s speaker and recommended that President Bidya Devi Bhandari issue a notice about ending the budget session. She complied immediately. Constitution experts questioned the move’s constitutionality, and opposition parties objected to the abrupt ending of the session, without the parliament’s having endorsed important bills. The ruling party leaders too expressed surprise. All the political leaders suspected that Oli wanted to bring back, through an ordinance, the bill that had in April been rejected by both the opposition and leaders in his party. That bill can help Oli split his own party.

Oli’s move to prorogue parliament came on the heels of a difficult week for him. His comrades in the standing committee, the party’s top body, had been asking for his resignation from the post of party chair and from the prime ministership. The previous night, 30 standing committee members had held a meeting to assess Oli’s performance and to ask for his resignation from his posts. Party insiders say Oli felt cornered, and thus took the measure, to check potential interventions against him that could be tabled during parliament sessions. Even the ruling party’s leaders were taken aback by Oli’s ‘sudden move’. The Nepal Communist Party (NCP)’s executive chairperson, Pushpa Kamal Dahal ‘Prachanda’, began panicking about the possibility of a party split, and upon learning about the registration of a new party that Oli could lead.

Slowly, it began to dawn on Oli’s comrades that this time around too, as always, they had underestimated Oli’s politicking skills. They had failed to notice that Oli had been planning such a move all along.

Chief among the weapons in Oli’s armoury has been his ability to capitalize on crises. He used India’s 2015 blockade, in the wake of Nepal’s devastating earthquakes, to catapult himself to the premiership. Oli became PM by riding a wave of nationalism--by further inflaming the public’s anti-India sentiments. And ever since he became prime minister, Oli has been tampering with state mechanisms to ensure outcomes in his favour. To fortify his grip on power, Oli has brazenly destroyed one institution of democracy after another.

His cadres and ministers have helped him all along. The first thing Oli did to consolidate his power was to bring under his purview major monitoring institutions--key institutions such as the Department of Money Laundering Investigation, the National Investigation Department, and the Department of Revenue Investigation. That gave him sweeping power regarding financial irregularities, and he could get away with engaging in questionable deals. His association with Yeti Holdings, which came to light after the death of tourism minister Rabindra Adhikari, is a case in point. It was later learned that Adhikari had been sent by Oli on a field visit to Pathibhar Temple, where Yeti Holdings was seeking to set up cable-car operations.

Similarly, the Oli government appointed people from Yeti Holdings to the board of Nepal Airlines Corporation and allowed them to run a hotel in Sagarmatha National Park. His government, by circumventing laws, also leased out Gokarna Resort and the land owned by Nepal Trust in Durbarmarg and Kalimati.

Oli also ensured that he would be better positioned to control the national narrative, quash dissent, and muzzle the press. Toward this end, the Oli administration issued several laws to curtail civil liberties and the freedom of expression. He gave the NID carte blanche to snoop on anyone. Political leaders say such authority can be misused by the government to keep a tab on political opponents or those perceived to be the government’s ‘enemies’. Oli tried to gag the press by introducing the Media Council Act. His government even tried to regulate social media. It has barred civil servants from sharing their views on social media. But even as he weakened democracy, no one questioned him. The leaders (including those from the opposition parties) and the public willfully ignored him. Only the Office of the Attorney General and the Court remained relatively free of his meddling.

Read also: When it comes to civil liberties, KP Oli is starting to look like the tyrants he once fought

It is part of the public record that Oli had consulted with the chief justice when he brought the aforementioned controversial bill. It was later learned that during that meeting, Oli had also discussed dissolving the House. Oli also tried to impinge on the autonomy of constitutional bodies like the National Human Rights Commission and the Public Service Commission. Under his watch, some controversial bills, like the Guthi Bill, were introduced to undermine the cultural rights of indigenous people.

“He will do anything in his power to stay in power,” says social scientist Bhaskar Gautam. “He can forge a coalition, dissolve parliament, and expand executive power. He is mainly focused on remaining prime minister--forever--even if that means splitting his own party.”

It’s the same mindset that informs the actions of Oli’s comrades in the ruling party--the Maoist leaders. “Prachanda has remained chairperson for 32 years. He made sure that he would remain chairperson for life. The party did not learn, not even from the Chinese leadership’s history,” says political analyst Hari Roka. “The Maoist’s ‘People’s War’ was a movement for change. It was supposed to represent a confluence of aspirations of the marginalized communities. Prachanda failed to institutionalize their aspirations for social, economic, cultural, political change. And now he is in confrontation with Oli for leadership, once again.”

Splitting one’s party and dissolving the House for political gain go against the spirit of democracy. But with Oli, his willingness to pursue power at any cost has been rather obvious. In fact, he gained political ascendancy by behaving undemocratically within his own party. When the CPN UML and the Maoists unified in May 2018, it first functioned as an ad hoc party. Theirs was merely a political alliance. But the public regarded the party as a unified party, which is why they had to dissolve their own parties. The parties could not officially have their own party organization any longer, so they created a central body of representatives from the two parties. Nobody was given specific roles in the new party.  From the central to local committees, everyone was provided de facto roles for the election. This continued for almost one-and-a-half years. After a year, the new party managed to nominate the president and the secretaries for the district committees. Over this period, the two main leaders, Oli and Prachanda, did whatever they desired. There were no roles prescribed for the leaders and no rules for the party. This allowed both leaders to exercise limitless power. In that setting, Oli consolidated power and convinced Prachanda to buy into his plan for a rotational premiership. But once Oli became prime minister, he did not keep his promise: and that’s the main point of contention now.

“I believe that the party unity will remain intact if the past agreements are honoured,” says Janardan Sharma, a close aide to Prachanda. He was referring to a written agreement between the top leaders.

But that outcome seems highly unlikely now. And increasingly, the earlier speculations about a party split are starting to seem ever more prescient. Two days ago, a group of little-known UML leaders registered a party named Communist Party of Nepal - United Marxist Leninist (CPN-UML). The registration allows Oli to fast track the forming of his own party, and then to form a coalition government.

Before the events of the last few days, Oli had tried, one last time, to play his usual game of drumming up anti-India rhetoric. That has been his tried and tested move, the trump card he routinely reaches for. Not surprisingly, when the government was criticized for its poor handling of the Covid-19 crisis, Oli played up the border issue. He managed to pass a new political map of Nepal, which included parts of Limpiyadhura, Kalapani, and Lipulekh--territory Nepal claims to have received during the Sugauli Treaty of 1816. With that move, Oli almost managed to turn the tables.

Next came the ordinance to amend the Political Parties Act; the ordinance would allow any disgruntled group within a party to split the party if they garnered the support of 40 percent of the members in a central committee or parliamentary party.

But despite all his chess moves, Oli could not convince his own central committee members to defend his poor response to the Covid-19 crisis and his shortcomings around overall governance. At a public function organized to mark the birthday of the charismatic communist leader Madan Bhandari, Oli tried conjuring up the old ‘blame India’ ruse yet again. He said that Delhi and some forces in Nepal wanted to remove him from power. When the central committee members insisted that he provide evidence for his claim, Oli could not furnish one.

Although his new statement energized his supporter base, others regarded it as an exceedingly embarrassing claim. Furthermore, members of the public asked Oli to call on the Indian ambassador and interrogate him about India’s supposed machinations. When the standing committee and central committee demanded Oli’s resignation, his followers took out a rally in support of Oli, chanting ‘Let Oli work’. They were trying to float the narrative that all the countermoves against Oli had been designed to prevent Oli from working on behalf of the nation--a narrative no one is buying. To make matters worse for Oli, the media later reported that Oli had instructed his cadres to take out the rally.

The current political turmoil is nearing the end game. But this chapter’s coming to a close will only mark the beginning of a difficult new phase for the country. Even if he makes an exit, Oli will have left the country in tatters. “It’s not important who leads the government next,” says social scientist Gautam. “What is important is that the next process should be the course correction for the destruction that has been inflicted by Oli.”