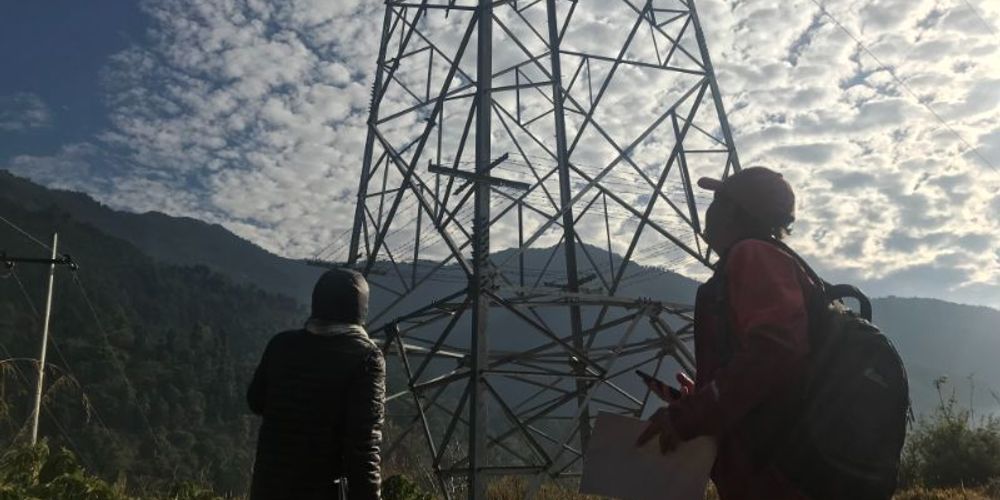 The Marsyangdi River flows through Lamjung district in west Nepal. In the indigenous Gurung language, “Marsyangdi” means “raging river.” But the Marsyangdi flows sluggishly below a high-voltage transmission line that runs along its left and right banks, against the stunning backdrop of Annapurna and Manaslu ranges on the horizon.

The Lamjung communities say two hydro projects in the area have seriously impacted the river’s flow – the German-funded 72 MW Middle Marsyangdi project in Bhoteodar, which came into operation in 2008, and 50 MW Upper Marsyangdi, a project in Bhulbhule funded by the China-owned Sinohydro, which came into operation in 2016. However, these projects are just the tip of the iceberg.

Several hydropower projects, with a total planned capacity of 2000 MW, have been installed or proposed around the Marsyangdi river and its tributaries in Lamjung and Manang. Transmission lines are being built to transfer this electricity to Kathmandu and India. The European Investment Bank (EIB) and Asian Development Bank (ADB) are supporting the Nepal Electricity Authority (NEA) to build a 220 kV high-voltage transmission line called the Marsyangdi Corridor.

Despite the rigorous environmental and social due diligence policies of the EIB and the ADB, the local communities were not consulted properly about the transmission line project, and other hydropower sector projects it is connected to. Lamjung communities have many concerns that they want to see addressed before the project moves forward. They are demanding that hydropower projects in their region seek their free, prior, and informed consent (FPIC) and respect their rights, including to health, safety, and livelihoods. They have set up the FPIC & Rights Forum, a district-level umbrella organization of several village-level struggle committees comprised of people affected by hydropower projects in Lamjung.

Communities’ concerns about the project

Community members are most concerned about the economic impacts of the 220 kV Marsyangdi Corridor. Land under or near transmission lines becomes less desirable and loses value. Community members reported difficulty in getting mortgages for land over which transmission lines run. Additionally, land that is taken for the towers is compensated at hundred percent of the government determined land value, whereas those who have land under the line will receive only ten percent for a narrow 30 m strip of land that falls directly under the wires. The communities feel ten percent is inadequate given the impacts on the land value, restrictions on use of the land below the line, and the numerous environmental and social impacts.

The vast majority of respondents in a community-led survey  – including mostly indigenous peoples, but also significant numbers of Brahmin/Chhetri respondents – said they learned about the 220 kV Marsyangdi Corridor from peer community leaders, rather than from government representatives or project authorities.

Environmental impacts are another significant concern for communities. Community members, especially women, fear that the number and types of birds in their area, which have already decreased due to existing projects, will reduce further after the Marsyangdi Corridor project is built. Many community members depend on the forests and trees for their livelihoods. Cutting down trees in the path of the transmission line causes ecological and economic impacts for the communities. Communities are also concerned about sound pollution and visual pollution.

Interestingly, 76% of respondents affected by the 220 kV Marsyangdi Corridor reported also being affected by hydropower projects or other power lines, and 51% reported being affected by Sinohydro’s 132 kV Bhulbhule Mid-Marsyangdi transmission line. This means the communities’ concerns about the planned 220 kV Marsyangdi Corridor are real, and informed by their first-hand lived experience with another similar project. Nearly 90% of the respondents said their families had lived in the area for generations, long before any hydropower sector development. They feel if the project is coming to their ancestral land, it must first take their permission.

Many social issues also ranked high on communities’ concerns. The communities fear the project will increase the risk of electrocution and towers toppling over which has been documented in Nepal’s Himalayan weather conditions. Some community members also want more information about potential health impacts of living near high-voltage transmission lines.

Research from other countries shows that transmission line projects impact women and men differently. More work is thus required to bring out the voices of women, especially indigenous and Dalit women, in Lamjung. Only 20% of the respondents in the project-led survey were women, even though the region has more women than men. Most of the female respondents were Brahmin women. There was only one Dalit respondent. Project funders, implementers, and the government should consult separately with women, and differently affected sub-groups of women, to ensure their voices inform project design. This is also one of the demands of the community.

What do the communities want?

Communities want to be part of the conversations about how economic, environmental and social impacts they could face will be avoided, mitigated, or at least adequately compensated both at the community and the individual level. These impacts have to be considered holistically along with impacts of other hydropower sector projects existing and planned in the region.The information about these impacts should be communicated to the communities in an accessible form, making sure that those who are most marginalized are also included in the process.Communities also want a reasonable share of the benefits of the projects that they are hosting in their lands, neighborhoods and forests. 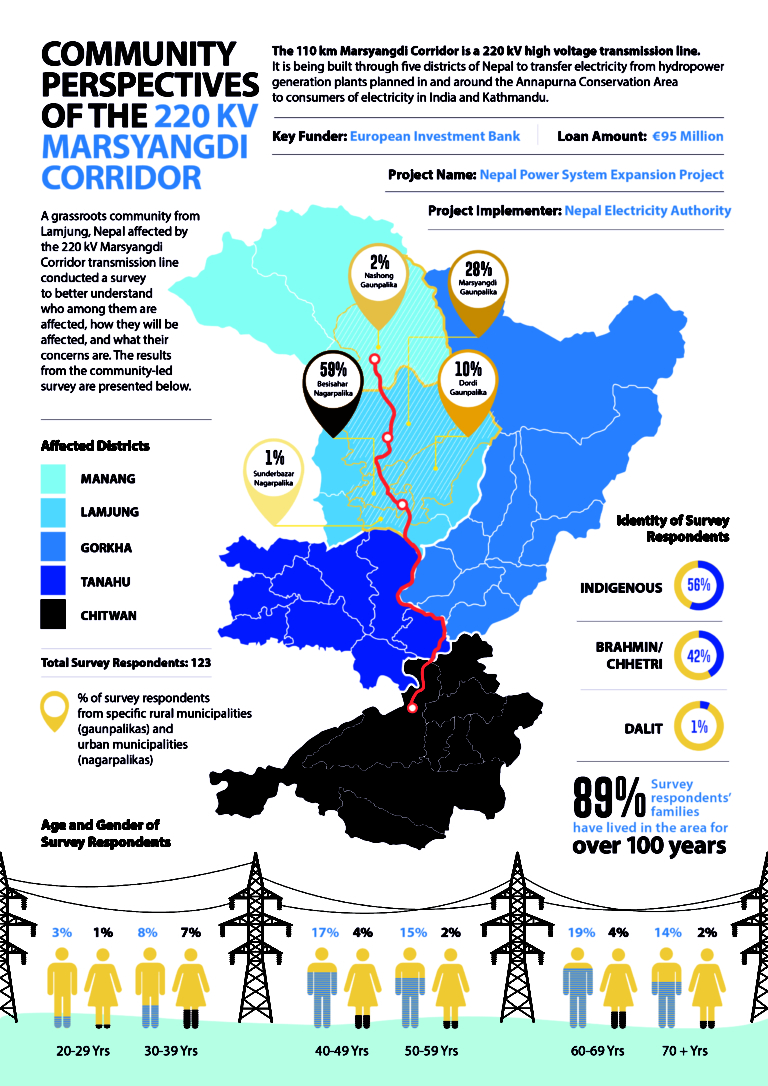 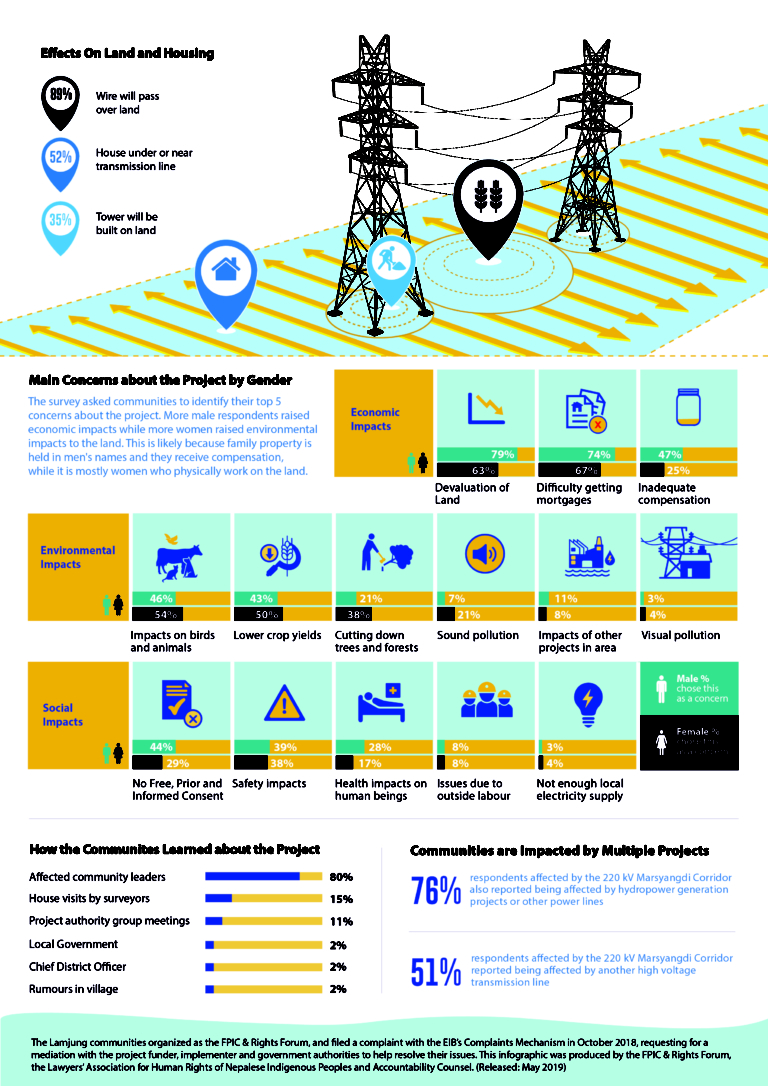 In October 2018 the Lamjung communities filed a complaint with the Complaints Mechanism of the EIB, the key funder. They requested that the mechanism mediate with the EIB management and project teams, the NEA and Nepali authorities to help resolve their issues. They wanted the EIB to ensure that the project complies with the domestic law, international law, and the the European Union’s environmental and social requirements.

Usually, after the complaints mechanism receives a complaint, they visit the local communities to ground-truth and validate the allegations and to meet all parties. Mechanism staff visited Lamjung in March 2019. As many as 700 affected community members met directly with the mechanism’s senior leadership. Women and men in equal numbers, several elderly people, and young people – from indigenous, Brahmin and Dalit communities – raised their concerns about the project.

After meeting with the communities, the Complaints Mechanism staff usually meet with the project promoter and relevant government authorities. After they have met key parties, they release an Initial Assessment Report, recommending the way forward to address the communities’ issues, be it through mediation, an independent investigation of the bank, or some combination.

The Complaints Mechanism has yet to release its Initial Assessment report, though it is expected soon. The communities want mediation among themselves on one hand, and with the EIB, NEA and Nepal government on the other. This would allow them to speak directly with the government and project authorities and work to resolve their issues collaboratively.

Indeed, this is a good time for project funders, implementers and government authorities to hold dialogue with the Lamjung communities, and their allies. Communities say construction has  not yet started on the 45-km stretch of the line that runs through Manang and Lamjung districts.. It is far more efficient for the project give communities an opportunity to inform project design before construction starts, rather than after. Additionally, delays in project construction due to lack of community buy-in can end up being more costly than taking the time earlier to resolve community concerns amicably.

The affected communities in Lamjung are calling for just and sustainable development, a goal shared by the EIB, the Nepal government, and NEA. The communities want the EIB to engage in this project. As a key international financier with growing investment in the region, the EIB has the resources and the responsibility to work with Nepali authorities, and to find solutions to the communities’ issues. The EIB has been steadily increasing its investments outside the European Union, and the Lamjung district communities have presented a tremendous opportunity for the EIB management to demonstrate accountability towards people affected by its projects outside Europe. The EIB could set a positive example by stepping up to help resolve issues with communities and hopefully expedite project completion in a rights-respecting manner.