A Nepal map which is said to have included the disputed territory of Limpiyadhura in northwestern Nepal has been widely circulated on social media. Most Twitter and Facebook users have posted the map with the following text:  “The map is from textbook of Grade 8. This must have been published around 2012-13 (BS) because it includes the population of 2011. This map shows Limpiyadhura within Nepal. It must be investigated when did they [leaders] prostrate before India and revised the map. Maybe the honorable members of parliament should pay heed to this.” BS is short for the Bikram Sambat calendar used in Nepal and it is 56.7 years ahead of the Anno Domini (AD) or the Gregorian calendar.

On May 12, Matrika Pokharel, a former president of Progressive Writers’ Association, posted a copy of the map along with the aforementioned text on Facebook and this been already been shared 245 times. Many users have commented on the status, in which they have guessed the map could be from 2012-13 (BS). Deepak Shrestha, a journalist with the state-owned Gorkhapatra daily, also shared the text and map on Facebook on May 12. His post has been shared 165 times. Similarly, Shivaram Bohaju’s post on Facebook has been shared 105 times. 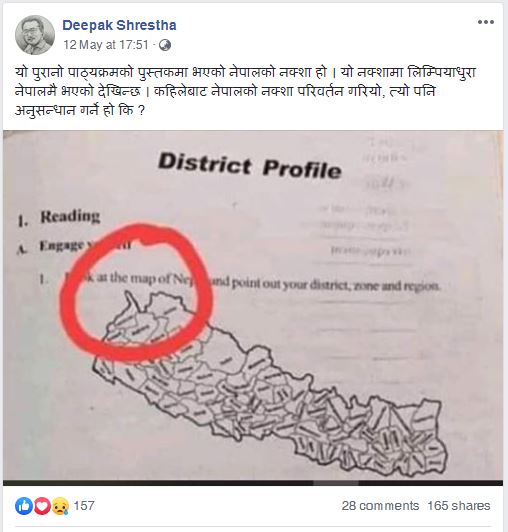 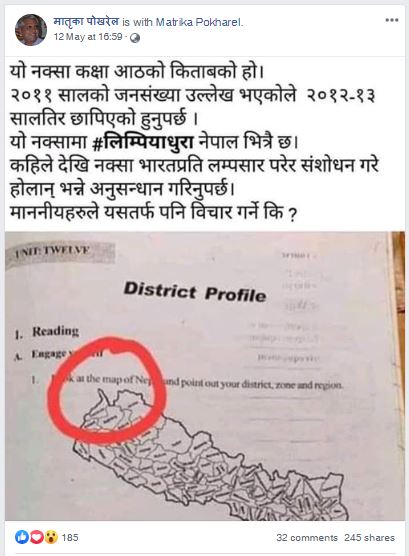 The map was also used with the hashtag #LipulekhBelongsToNepal, which recently trended on Twitter.

Twitter user Shirja Shrestha tweeted: “Map of Nepal from Grade 8 English book. The enemy would not be attacking you if something valuable wasn’t inside you. India always had a black eye in terms of land invasion.” Dilandra Pathak, a Twitter user who identifies himself as a geologist, tweeted that the map was an old document showing Lipulekh and Limpiyadhura [on the Nepali side]. 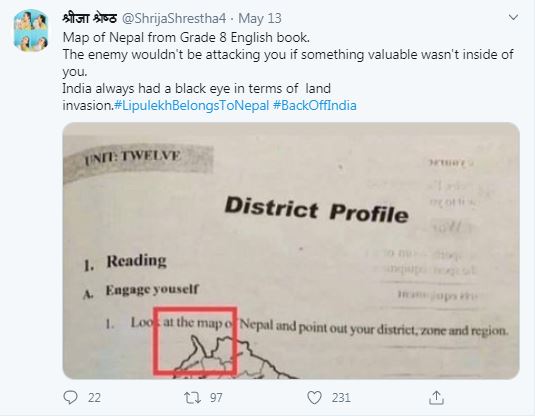 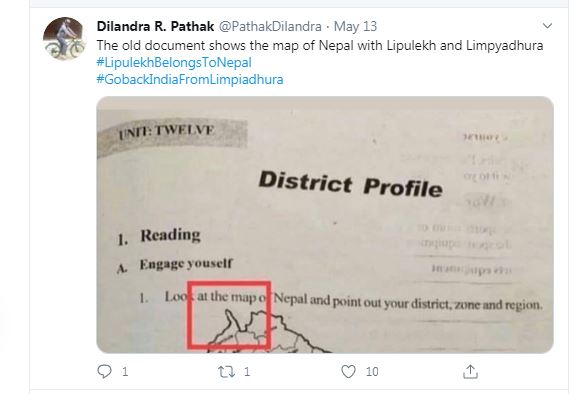 Another Twitter user, Pradip Bhattarai, tweeted: “This is what the map of Nepal was like in 2011 [BS]. This was correct. But the sliver of land jutting out of it was removed in 2032 BS [1975 AD]. I don’t think there had been any protest in 1975. In 1975, Tulsi Giri was the prime minister and Birendra was the king of Nepal. Why was the territory of Nepal removed like this? If anyone has any information about this, please share. ” His tweet has been retweeted 18 times.

Most social media users have claimed that the map was found in the historical archives. They also claimed it was in the school textbook in 2011/2012 BS (1954-55). But some users in their comments and replies have claimed that it is a current textbook.

This is not the first time the map has been widely shared on social media. Following the inauguration of a “link road” by India, which connects Dharchula with Lipulekh in the disputed border region in Nepal’s northwestern edge, protests have erupted in Nepal, which claims the territory historically belongs to Nepal. The disputed territory in the remote and strategic region of Nepal’s far-west includes Limpiyadhura, Lipulekh and Kalapani.

We found the Curriculum Development Center (CDC) under the Ministry of Education had published the map in two places in the Grade 8 English textbook in 2071 BS (2014 AD). Ganesh Prasad Bhattarai, director of the CDC, said while his office usually relied on maps from the Department of Survey (DOS), someone could have used a map obtained from a Google search in the textbook. “We publish textbooks and reference materials,” he told South Asia Check. “We will investigate if, for some reason, the book designer used a different map from the one provided by the DOS,” he said.

We emailed Bhattarai a few pages of the textbook containing the viral map, requesting him to study them. The pages sent to him included the map, which is in the chapter titled “District Profile”, the image of the book’s cover and the page containing the authors’ names. Under the map there is a profile of Dadeldhura district although the disputed region is in Nepal’s Darchula district.

The book in question was the first edition published in 2015 and reprinted in 2016 and 2017. Currently, some schools in Kathmandu use it as an English textbook for Grade 8. Radha Karki, an English teacher at Tilingtar Higher Secondary School in Dhapasi, said the book was part of the textbook authorized by the government. “Our school is not the only one using the book. Government and community schools across the country use it as textbook,” she said. 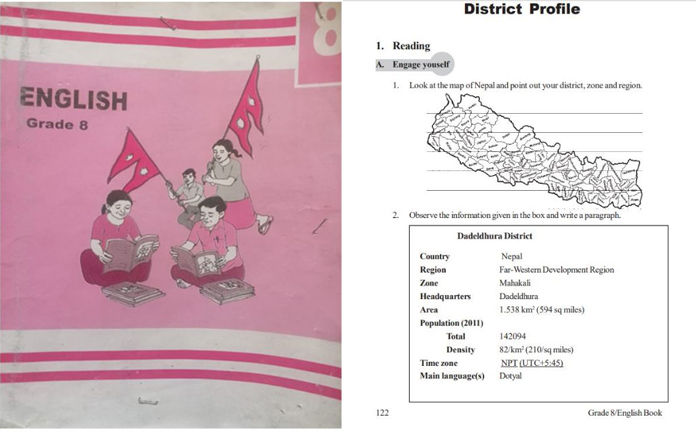 (Left) The cover of the Grade 8 English textbook. (Right) A page containing the map of Nepal and Dadeldhura district profile.

According to Bhattarai, the book sent to him by South Asia Check states it is a 2015 edition while the book issued by his office is a 2014 edition and the page numbers do not match. “It looks like the map [viral on social media] was copied from our textbook. I am at home now due to the lockdown so I have not been able to study the matter. This also happened before I joined CDC,” he said.

Under the “Reading” section on page 122 of the book issued by the CDC, there is a map of Nepal under which there’s a sub-section titled “Engage Yourself”. Then follows the first assignment with an instruction that reads: “Look at the map and point out your district, zone and region.” On the same page there is a second assignment, which asks the students to write a paragraph about Dadeldhura district, whose details are given in a box. Among the details of the district, the population has been stated as 142,094 (2011). The figures are from the national census conducted in 2011 AD.

The misleading claims that it was an old map from 2011 BS circulated on the social media because many social media users misread 2011 AD as 2011 Bikram Sambat.

© Copyright 2021 the Record | All Rights Reserved